Wave Palace is absolute beachfront set on approx. 4000sqm of prime land with a high quality left and right directly out front within a short paddle.
Your surf experience at Wave Palace is not limited to the surf out front and your expert hosts are happy to show you other surf spots within close proximity. At least half a dozen other breaks catering to all standards are within an hours drive.  Non Surfers will be as happy as surfers snorkelling, sunbaking on the pristine sand beach or by the infinity pool  or strolling through the local village

Package are all inclusive and all meals and drinks. (alcohol at own expenses)

Dining will certainly be a highlight of your stay with fresh produce in abundance, fresh Seafood to imported meats accompanied by fresh organic fruit and vegetables and cooked in a variety of ways to suit your taste...Traditional indonesian flavours from Spicy to Mild with some western dishes thrown into the mix. Your hosts will cater to all your requirements from surf to food, fishing trips, sightseeing etc. and there is nothing rigid about their management style.

From your arrival at Istana Ombak you will be showered with wonderful genuine hospitality and you will leave feeling surfed out, well fed and culturally enrich

Accommodation is super comfortable in well appointed bungalows with private facilities. As you can see in the photos no expense has been spared in the construction of Istana Wave Palace Resort. All materials used are high quality and timber used is 100% local.  The resort is undergoing constant improvements and now has a stunning beachfront pool (watch the barrels while you are taking a dip) which will be the ultimate place to chill in between surfs.  Rod has created a piece of paradise that you will not want to leave and you will vow to return to.  Those already lucky enough to stay at Wave Palace have been blown away by this incredible location.

This area of Java is unlike the Indonesia you may have previously experienced.  No hawkers, no nightclubs and best of all NO CROWDS!  Just a total escape from the hustle and bustle of Western society with incredible surf, friendly locals, comfortable accommopdation and pristine environment.

Rod Steeles is the man behind Wave Palace East Java.  Rod grew up surfing the consistently powerful waves around the Lennox Head-Ballina region on the Far North Coast of New South Wales , Australia. The former President of one of Australia's most respected boardriders clubs - Le-Ba ( Lennox Ballina Boardriders ) - Rod has proven his competitive surfing credentials over the years securing many amateur titles. He is respected not only in Australia but internationally as a brilliant surfer who loves nothing better than stylishly charging heaving reefbreak barrels. With Rods help you will experience amazing waves and some of the nicest people in Indonesia. Rod has travelled Indo far and wide and stumbled upon this pristine region of Java a few years back and established great relations with the local landowners.  Rod's Wave Palace Resort is one of the only accommodation facility in the bay and it is unlikely any other accommodation will be built here for a while longer or to this quality.  Rod has found his piece of paradise and is now a respected local, contributing greatly to the local community.

The Surf:
Wave Palace is a bay hosting a left on one side and right on the other with both working consistently and surfable at all tides (although low is for experts only).  This East Java bay faces South and catches any kind of swell from south west to the rare south east swell. The best time of the year is the dry season April through October however during the wet season (Nov-Mar) there is plenty of swell but the winds tend to be more variable and offshores not as common over this period.

IstanaOmbak Left
The left has many moods, from playful and rippable to heavy, powerful and unpredictable. The more southerly the swell, the longer and more predicable and playful the left will be. Behind the wave a shelf drops quickly to deep water. This rapid transition makes it a really heavy wave when over five foot, especially at low tide. On bigger swells and lower the tides you can get the biggest barrel of your life but below five foot on high tide it's a powerful but super rippable wave. Compared to Bingin at under 5, Padang from 6-8' and Chopes at over 8'. Seen on many magazine covers in 2011 with Bruce Irons and Rizal Tanjung.

IstanaOmbak Right
The right is a hollow peak on most tides, providing more ripable waves with more water over the reef.  Westerly swells are best for the right, pushing further down the reef for a longer ride. Long-period southwest swells in the two-to-six foot range are ideal. The bigger it is the higher it needs to be. The higher the tide the more it turns into a ripple wave and the end section isn't to shallow. When the swell is bigger then 5 foot. The current can cause bumps up the face on the out going tide as the water rushes out over the reef as the channel is very small. When bigger and lower tides its for experienced surfers only. When it's a little higher and small its a safe wave for all levels of surfing. Keiran Perrow compared this wave to backdoor Pipe on a perfect 6' day recently.

This area of Java has loads of bays and waves‚ many still uncharted because of the landscape, thick forests and lack of access. In saying that, there are several other waves within a short drive and walk, and the resort has a boat to access other spots. But 98 percent of the time you will want to just surf out the front of the resort.

Puncher: Longboard/Shortboard -Basic to Intermediate wave. Rivermouth/beachbreak: 1 hour drive from Wave Palace:
Left hander this is a long left hander that is a great beginner and intermediate wave with a easy take off and a sloping wall to carve along.  1-4 foot is an easy wave  and it can break up to 10 foot and if the sand banks are in correct position this can be a 200metre + wave  Over 4foot for intermediate and experienced surfers…   (PERFECT longboarders wave)

There is 3 coves here all with waves although there is one cove that has the best of the rest… there is a right hander that barrels and some steep wall sections and then the left hander that is a nice wally wave  both for intermediate surfers.

* Even though our scheduled departures run between March and November the resort is open all year and some great wet season waves can be had during Nov-Mar period.

Fishing – Some great fishing awaits in the tropical waters off Java, in the unlikely event of small surf the boat is ready and waiting for you to jump on and start reeling some whoppers. Rod and his team love to take you out in their boat and the fishing is amazing in this region.

Cave Walk – An amazing natural feature is this area of Java is Gong Cave one of the most beautiful caves in South Asia. The limestone cave is a worth visting even if the surf is pumping and if you can fit it in your schedule you’ll be rewarded.
Bat Island Cruises
Spear fishing directly out front of the resort. 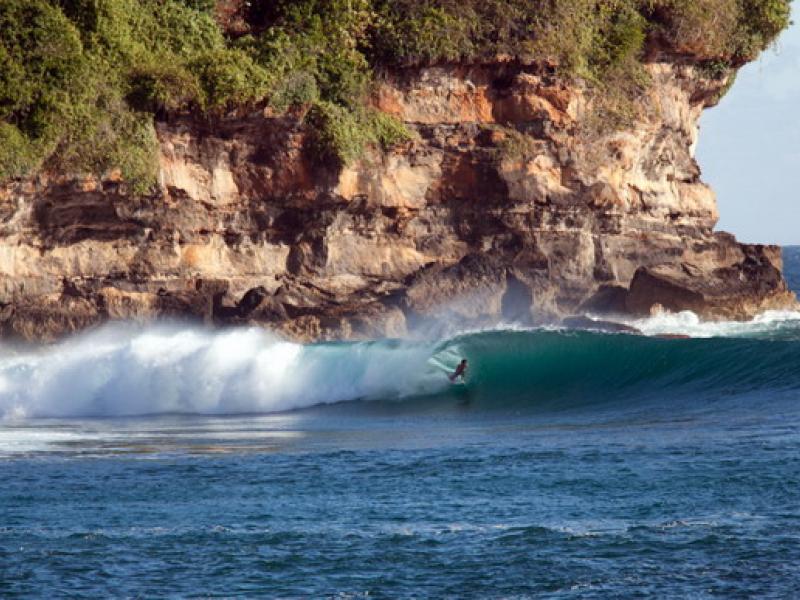 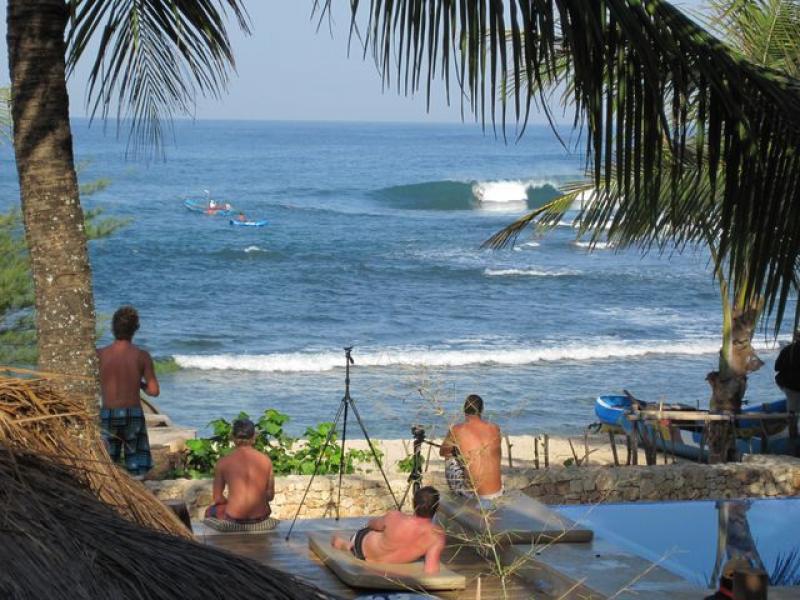 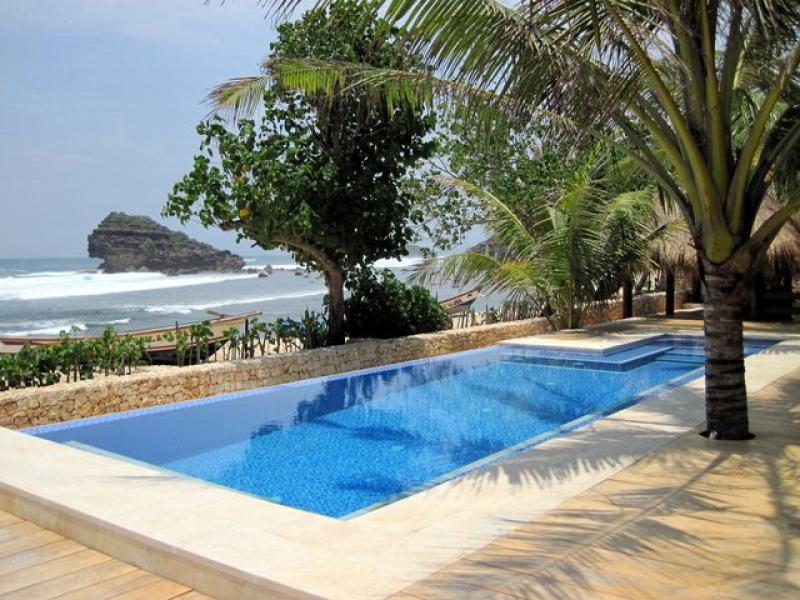 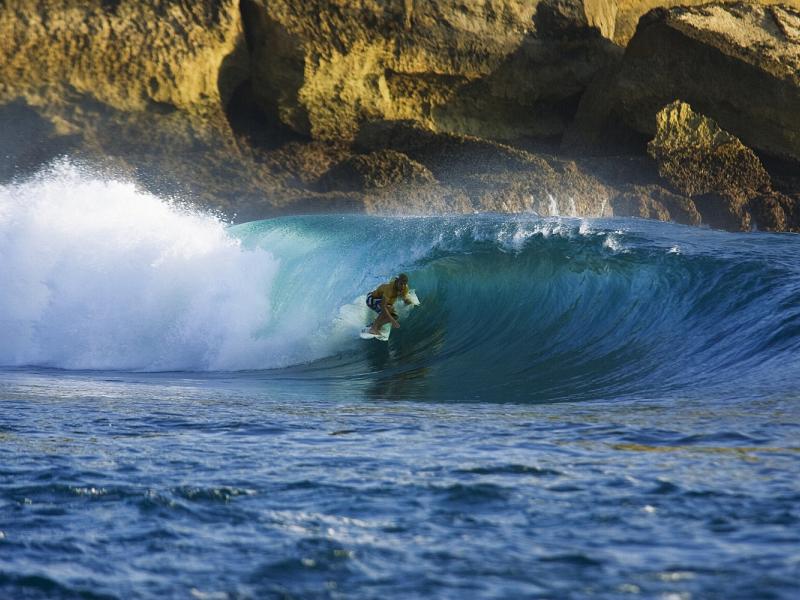 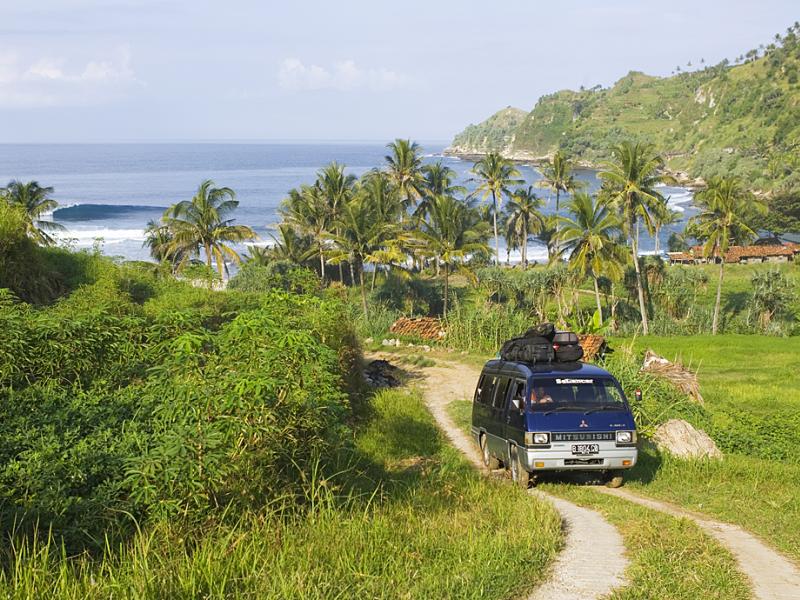 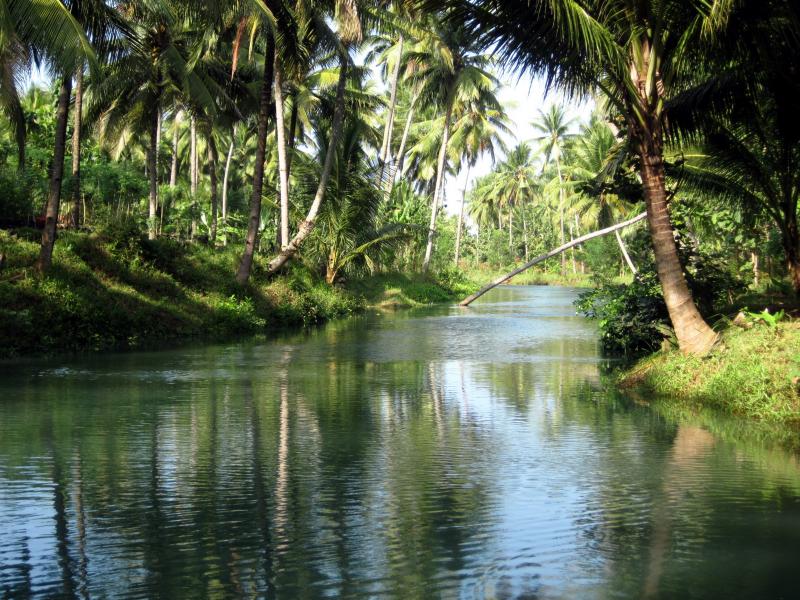 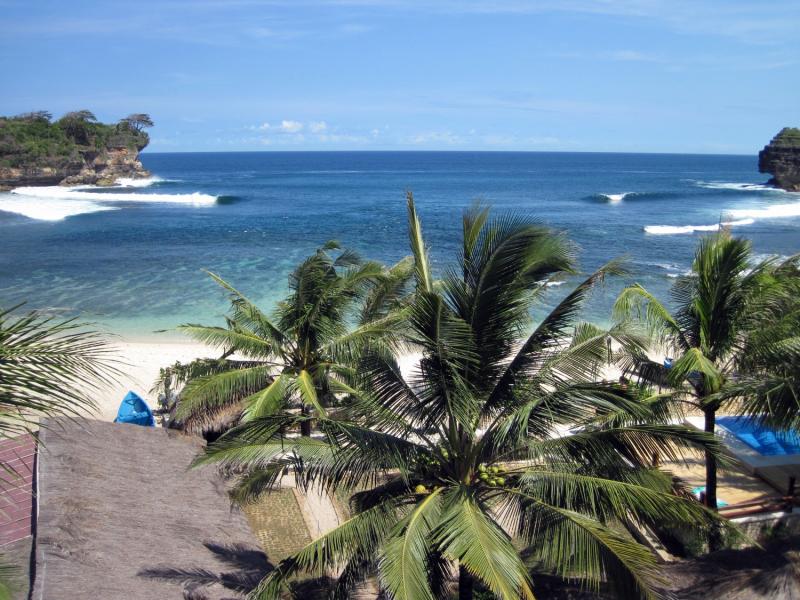 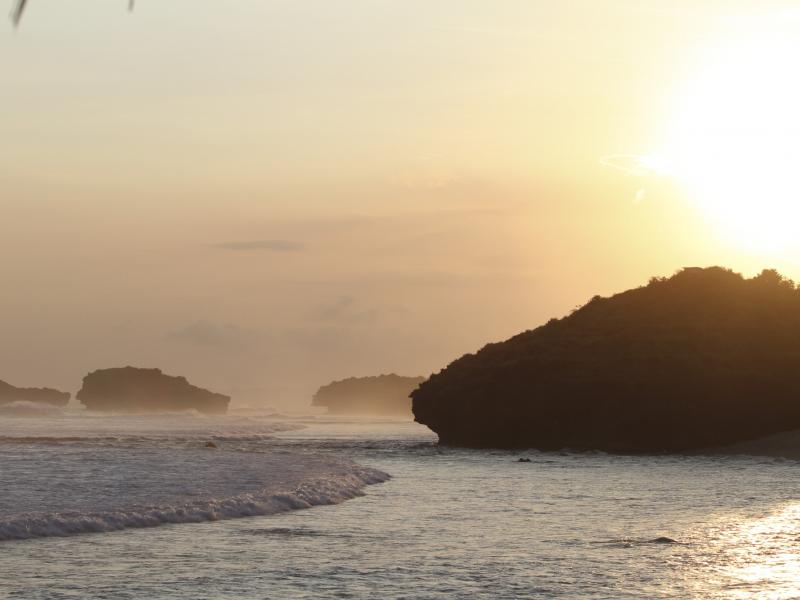 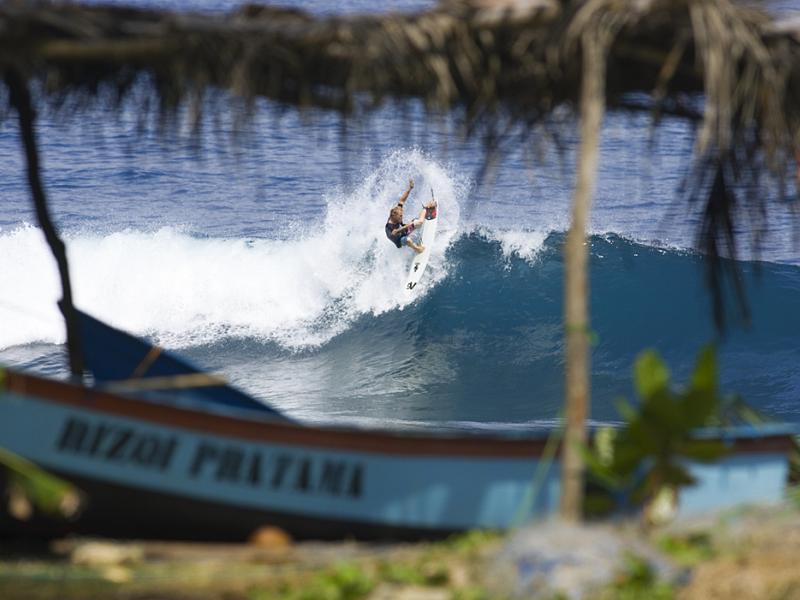 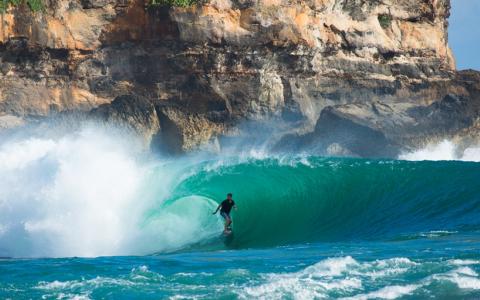